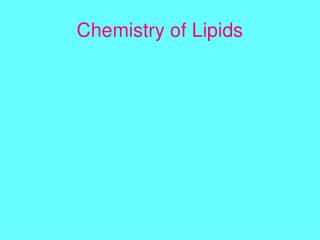 LIPIDS by Endang Astuti Chemistry Department - . lipids can be considered to be biological molecules which are soluble in

METABOLISM OF LIPIDS - . things to know. how metabolic oxidation of lipids releases large quantities of energy through

Metabolism of lipids - . vladimíra kvasnicová. lipids = group of biological molecules that are insoluble in aqueous

Structure of lipids - . pavla balínová. lipids. lipids are a large and heterogenous group of substances of biological

LIPIDS - . what are lipids?. fat cell. main component in every living cell. organic have carbon chains with attached