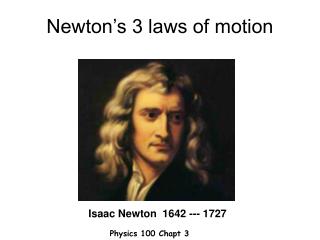 Newton’s 3 laws of motion. Isaac Newton 1642 --- 1727. Physics 100 Chapt 3. 1 st Law: Law of Inertia. A body at rest tends to stay at rest, a body in motion tends to keep moving along at a constant speed and in a straight-line path unless interfered with by some external forces.

Chapter 4 Linear Motion - . you can describe the motion of an object by its position, speed, direction, and acceleration.

Chapter 12: Forces and Motion - . standards. sps8. students will determine relationships among force, mass and motion b.

Rotational Motion - . hope you learned polar coordinates. rotation. the motion of these objects cannot be easily

Chapter 2 - . linear kinematics describing objects in motion. define motion:. motion is a change in position over a