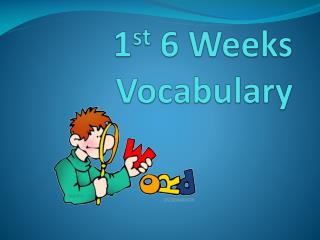 1 st 6 Weeks Review - . test wednesday remember your pencil and calculator. part i.  classify each of the following

1 st 6 Weeks Exam FLASH CARDS - . instructions. in order to make flash cards, you will need to print this entire

1 st Six Weeks - . review for lab safety and equipment test. what is this tool? what si unit do we use?. it is a flask