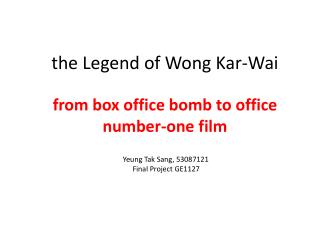 SERVICE - . presented by: erinn wong district governor. why do you love service?. it makes me feel good i made an impact

U.S. Novels and Short Stories and Authors - . “the legend of sleepy hollow”. ichabod crane and the headless horseman.

Horror Films - . horror films is a type of film genre which is completely different from the usual action or adventure

Movies and the Impact of Images - . chapter 7. “ star wars effectively brought to an end the golden era of early-1970s