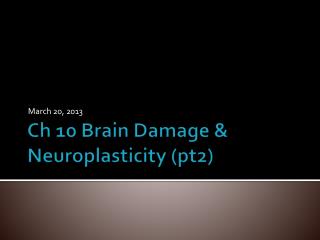 Chapter 10 Blood - . blood. the only fluid tissue in the human body classified as a connective tissue living cells =

Chapter 10: Motivation and Emotion - . defining motivation, and a model. dynamics of behavior; the ways in which actions

Chapter 10 Visual Awareness - . the neural bases of visual awareness as revealed by dissociations between vision and

What does the brain look like after cognitive treatment? - . helen m. genova, ph.d. brain injury alliance of new jersey

Brain function – the evidence from brain damage - . brain damage to a specific area and you cant talk? maybe that area

Memmler’s The Human Body in Health and Disease 11 th edition - . chapter 10 the nervous system: the brain and cranial

Brain Scanning Technology - . bloa. how do we know what’s going on inside the brain?. what do these techniques involve?