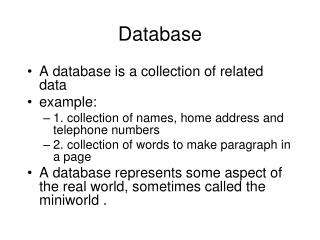 Database. A database is a collection of related data example: 1. collection of names, home address and telephone numbers 2. collection of words to make paragraph in a page A database represents some aspect of the real world, sometimes called the miniworld. Database Management System. Database - . ed milne. theme. an introduction to databases using the base component of libreoffice. database. a database

Database - . cvsl for ib itgs. topics to be covered . “ what is a database;” understand the difference between data

Database - . by: greg. jtable. the jtable is used to display and edit regular two-dimensional tables of cells. use

Database - . more database concepts and vocabulary. database categorizations i. how many users can use the database at a

Database - Relation of the high- and low orbital satellite malfunctions to the different geophysical parameters. a.

Chapter 5 Relational Database Management Systems and SQL - . fall 2012. history of sql. proposed by e.f.codd in his 1970

Database as a Service: An Architecture Based Approach to Designing DBaaS - . mathew panat oracle enterprise architect.

Database Mirroring - . mirroring is mainly implemented for increasing the database availability. is configured on a