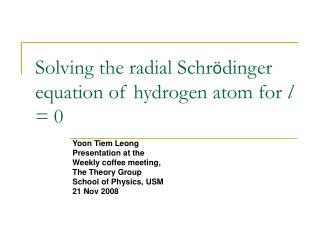 PHYS 342 - . modern physics 2. course elements. the schrödinger equation the rutherford-bohr model of the atom the

THE STRUCTURE OF THE ATOM - . atomic models. pioneers of the atom. democritus lavoisier dalton thompson milliken

Chapter 4: Atoms - . the building blocks of matter. an atom is the smallest particle of an element that retains the

Quantitative Chemistry - . representing chemicals symbols and formulae. each element has a symbol. many you can predict

Hydrogen Cyanide - . the other silent killer. course objectives. the goal of this program is to provide the learner with

Section 2.1 The Structure of the Atom - . in this section… the components of an atom atomic symbols isotopes and atomic

Chapter 7 - . atoms, elements, compounds and mixtures. 7.1 structure of an atom. objectives: summarize how models of the

AP Chemistry Chapter 3 The Structure of the Atom - . beginning of the atomic model. democritus was the early (around