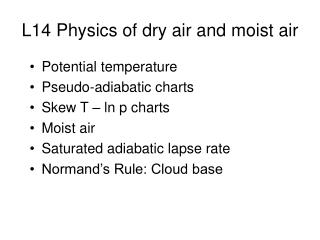 Chapter 7 – Moist Air - . the dew (frost) point if saturation is reached with respect to ice we are at the frost point

Dry Air System and Drawing Current - . motivation . the study is made to correlate the mutr drawing current and humidity.

Properties of Air and Air Pressure - . because air has mass, it also has other properties, including density and

Air and Air Pressure - . 6c. air is a mixture of elements, compounds and molecules that has mass, volume, and therefore

Air and Air Pollution - . key concepts. structure and composition of the atmosphere. types and sources of outdoor air

Air Resources and Air Pollution - . our atmosphere. 17_00co.jpg. 17_01.jpg. structure and science of the atmosphere.