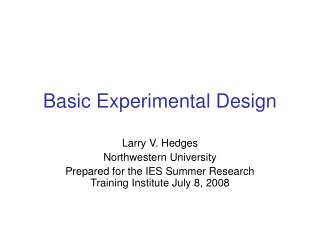 Experimental Design - . a researcher can most convincingly identify cause-and-effect relationships by using an

Experimental Design - . how to design a psychology experiment. start with a research question it must be testable – you

EXPERIMENTAL DESIGN - . science answers questions with experiments. begin by asking a question about your topic. define