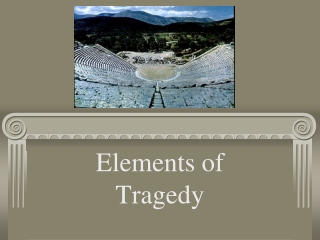 Elements of Tragedy. Definition According to the Classic Greeks. Lysistrata - . i. short introduction of greek comedy: a. by the fifth century b.c. both tragedy and comedy were regularly

Tragedy and the Tragic Hero - . aristotle, the ancient greek philosopher, identified the main characteristics of tragedy.

What Defines Tragedy? - . where does tragedy come from?. the greek philosopher aristotle first defined “tragedy” in

Aristotle on Tragedy - . the poetics : 4 th century b.c. the six elements of tragedy. plot: “the plot, then, is the

The Spanish tragedy - . by dean, m arco and parker . thomas kyd. was a english dramatist, the author of the spanish

Introduction to Greek Tragedy - . “it’s all greek to me…”. background of greek tragedy . origins tragedy is

Elements of Greek Tragedy - . as defined by aristotle. a tragedy is:. it must be acted out, not merely narrated.

Elements of a Shakespearean Tragedy - . exposition. time and place is established main characters, their positions,

A Tragedy! - Understanding the tragic elements of macbeth . a tragedy!. common understanding. there is one simple (and

The Tragedy of Hamlet - . the tragedy of hamlet. this tragedy was written by shakespeare at an uncertain date between

Classicism and the Tragedy - . antigone. what is classicism?. historical tradition aesthetic attitudes - nature and