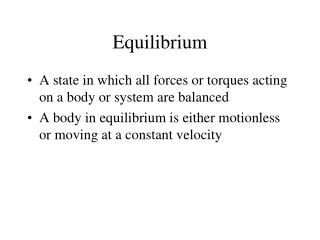 Equilibrium. A state in which all forces or torques acting on a body or system are balanced A body in equilibrium is either motionless or moving at a constant velocity. Static Equilibrium. The sum of forces on all 3 axes = 0 ( S F X = S F Y = S F Z =0)

Applications of Aqueous Equilibria - . “common ions”. when we dissolve acetic acid in water, the following