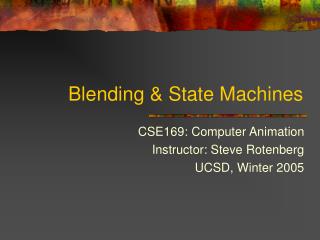 Blending & State Machines. CSE169: Computer Animation Instructor: Steve Rotenberg UCSD, Winter 2005. Blending & Sequencing. Now that we understand how a character rig works and how to manipulate animation data, we can edit and play back simple animation

Blending and Antialiasing - . blending. blending is a combination of color of two or more objects. we need to enable

Blending Magic!!! - . miss green kindergarten. why are blends important?. every day after school hayley has chores to do

Filters and Blend Modes - . filters filters are a method that processes the pixels of a graphic object to produce a

Blending - Mae152 computer graphics for engineers and scientists fall 03. blending. outline. why do we want to blend?

Notes #6 - Quote blending - . 2 methods for blending quotes into a paragraph:. blend the quote as if it is a natural part

Options for Blending Qualitative and Quantitative Research Methods - . ian mcdowell (based on a seminar presentation in

Quote Blending - . blending. when writing a response to any literary text, the writer needs support to lend credence to

Machines Helping Humans Helping Machines - How do we communicate with trillions of machines? we don’t. it is up to them