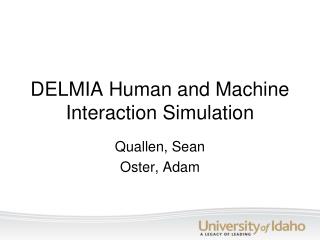 DELMIA Human and Machine Interaction Simulation . Quallen , Sean Oster, Adam. BE WARNED. THIS WILL NOT BE EASY DELMIA is a product lifecycle management tool Lifecycles are processes Therefore everything about DELMIA is a process Human-Computer Interaction (HCI) - . human the end-user of a program the others in the organization. computer the machine

Human computer interaction - . eur ing roger fairhead bsc ceng miet mapm micg with thanks to:. content. what is the