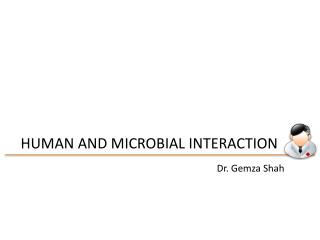 HUMAN AND MICROBIAL INTERACTION. Dr. Gemza Shah. NATURE OF INTERACTION BETWEEN MICROBES AND HUMAN. Transient microbiota may be present for days, weeks, or months Resident microbiota permanently colonize the host. . Human Environment and Interaction - . h-e-i. it occurs because humans depend on, adapt to, and modify the world around

Human Development and Interaction - . adolescence. defining adolescence. little consensus on the beginning and

Human-Computer Interaction - . lecture 3 – the science of usability. some lessons from history. control panels.

Human-Environmental Interaction - . lincoln and the winter of the deep snow in macon county illinois. by: kathleen m.

Human Environment Interaction - . august 28-29, 2013 students will be able to explain how the changing relationship