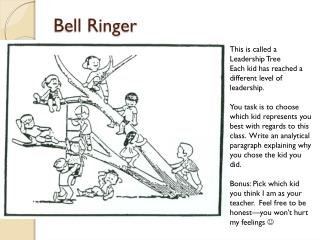 Bell Ringer. This is called a Leadership Tree Each kid has reached a different level of leadership. You task is to choose which kid represents you best with regards to this class. Write an analytical paragraph explaining why you chose the kid you did. Label the following pictures as Mutualism, commensalism, or parasitism: - Bell ringer: complete the question and turn in

Standard 2 - . part 2: how ecosystems work. bell ringer, 9/4. get your tribe points get out your squirrel island hand out

BELL RINGER - . what subatomic particle is not located in the nucleus?. history. atomic history research. chapter 3.