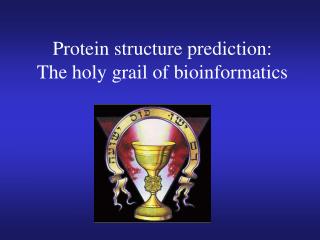 The Holy Grail - . by pat stapleton and burhan rakab. what is the holy grail?. a mythical artefact with many legends and

Bioinformatics of Protein Structure - . protein structures often characterized by secondary structure content. all a all

Protein structure prediction - . “protein threading”. the time required to find the global minimum is shown on

Protein Structure Prediction - . what’s the big deal? why is it important? who is working on it different methods.