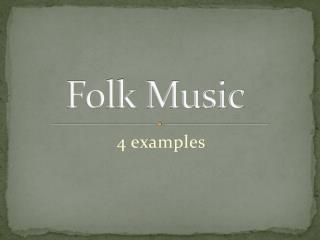 Folk Music . 4 examples. What is folk music?. A broad term applied to many kinds of music . Also called Traditional Music. There is often no known author/composer. It is passed down aurally/orally.

Unit 11 The Cellist of Sarajevo - . activity one the roses against bombs— anti-war masterpieces activity two cello

Folk Tales - . stories of a people. folk tales are stories that teach a lesson and are passed down orally to each