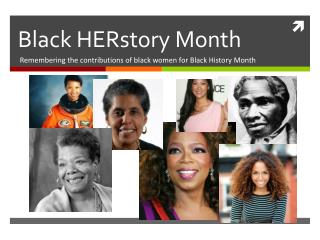 HERstory - . women and the civil war. for women, the civil war “ represented both burden and opportunity ”. how did

HERstory - . women’s resistance to violence. hundreds of years ago. the origins of the word rape are found in ancient

HERSTORY: - . violence against women and their children. marxist feminism (origins of women’s oppression). by

Black History Month - . african americans who have influenced our lives for the better. why do we celebrate black

BLACK HISTORY MONTH - . bolton at home in partnership with bolton council, brec and bme voluntary groups in bolton is

Black History Month - . february is black history month – a celebration of the struggles, victories, and contributions

Black History Month - . the national society of black engineers.  “leadership cannot just go along to get along.