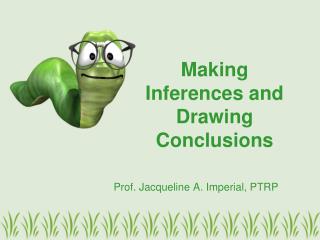 Making Inferences and Drawing Conclusions. Prof. Jacqueline A. Imperial, PTRP. Warmup. Write a five sentence paragraph answering this question: “What holiday is most important to your family and how do you know it is important to them?”

4.RL.1 - Refer to details and examples in a text when explaining what the text says explicitly and when drawing