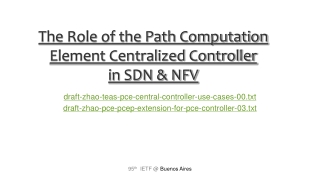 MapleSim and the Advantages of Physical Modeling - . july 22 nd 2010. why is physical modeling so difficult?. multidomain

Traffic Control Plan - . a plan directed to the safe and expeditious movement of traffic through construction and to the

The Technology Side of the Sydney Coordinated Adaptive Traffic System (SCATS) - . presented by: betsy williams transcore.