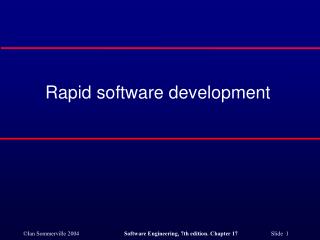 Rapid software development. Objectives. To explain how an iterative, incremental development process leads to faster delivery of more useful software To discuss the essence of agile development methods To explain the principles and practices of extreme programming Rapid Software Testing - . rapid testing. this is a general testing methodology. it adapts to any kind of project or