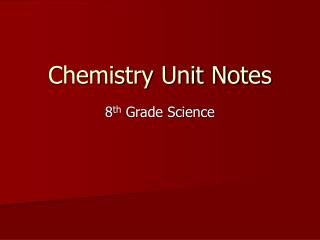 Chemistry Unit Notes. 8 th Grade Science. Basic Vocabulary. Matter : Anything that has mass and volume Mass : Amount of matter in an object Weight : Measure of the force of attraction between objects due to mass and gravity Volume : Amount of space an object takes up Chemistry Notes - . covalent bonding diagrams. an addendum to lewis structures. carbon and silicon are exceptions to the

Chemistry Notes - . atoms. the nucleus of an atom includes: protons and neutrons. electrons orbit the nucleus in specific

Chemistry Notes - . nuclear decay. nuclear radiation. radioactivity : emission of rays or particles from the nucleus of

CHEMISTRY NOTES - . voigt, 7 th grade palmetto scholars academy. atoms. atoms have mass and take up space they are the

Chemistry Notes - Chemistry notes. molecules. a molecule consists of two or more atoms of the same element, or

CHEMISTRY NOTES - MATTER - . matter – anything that has mass and volume. matter is made up of tiny particles called