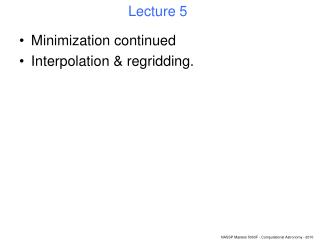 Lecture 5. Minimization continued Interpolation & regridding. Minimization issues:. Robust setting of starting bounds: how to make sure the minimum is within the box. Once you know that, you can, in the words of Press et al, “hunt it down like a scared rabbit.” PowerPoint Presentation: 5 Tips From Professionals - Powerpoint presentations are an extremely significant part of a