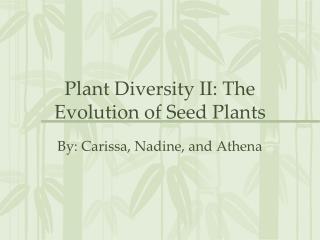 Plant Diversity II: The Evolution of Seed Plants. By: Carissa, Nadine, and Athena. Assessment statements. 9.3.2- Distinguish between pollination fertilization and seed dispersal. The reduced gametophytes of seed plants are protected in ovules and pollen grains. These adaptations include:

Plant Diversity - . the evolution and classification of plants. why should we care about plants, at all?. carbon dioxide