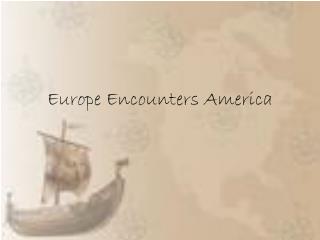 Europe Encounters America. Vikings Arrive in America. Leif Ericsson & The Vikings What – Group of Scandinavian explorers that are believed to have explored North America before Columbus When – 1000 A.D. Where – Vinland (Newfoundland) Significance – 1 st Europeans to “discover” America. Europe Encounters the World - . political – rise of european monarchs economic – mercantilism and the age of

ALIEN ENCOUNTERS: EUROPE IN THE AMERICAS - . columbus and the discovery of america christopher columbus reached the west

ALIEN ENCOUNTERS: EUROPE IN THE AMERICAS - . chapter one (20-51). columbus’s great triumph – and error. what was

encounters - . a body of work in black and white photography. by ellen van gelder. studio . to share your weakness is to

Europe and Latin America - . to the search of new models? from dependency to interdependency. from colonization to

Why America isn't Europe - . and never will be. important prologue. this lecture has nothing to do with “which is

Why America isn’t Europe - . a critical historical look at two very different views of liberal democracy and how they

First Encounters - As the representative of a christian nation, columbus believed that he had the right and duty to