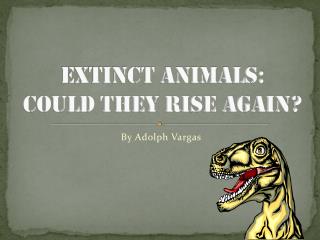 Extinct Animals: could they rise again?

Extinct Animals: could they rise again?. By Adolph Vargas. My Topic. For this project on genetics, I chose to focus on the topic of genetically reproducing extinct animals.

Extinct Animals: could they rise again?

Species Extinction- Reasons and Effects? - In biology and ecology, extinction is the termination of an organism or of a

Endangered Animals of Australia - . max b's baw baw frog. by max b. feet. what it looks like. legs. hops. 8 fingers.

What is the biggest organism ever? - . apatosaurus ?. blue whale?. coast redwood?. none of the above – it’s a fungus.

IMPACTS OF CLIMATE CHANGE ON BIODIVERSITY WITH EMPHASIS ON WILDLIFE (Plants and Animals) - . presented at baobab holiday

Ocean Biome Project - . by: prabhjot, amanjoit, balreen and ramneet. 1. table of contents introduction to our biome, the

Extinct Animals - . by. dodo bird. the habitat of the dodo bird was mauritius , an island in the indian ocean. the dodo

Extinction - . noadswood science, 2011. extinction. to understand why a species may become extinct.

Patterns in Nature Topic 14: Gaseous Exchange in Animals - . part of the patterns in nature module biology in focus,

Extinct animals - . extinct species is a term that is used to refer to species of organisms that are no longer present in

Endangered Species - The wildcare trust was set up in 2005, it had a goal in sight which is to protect animals throughout

Extinction - . how do animals “know” when a schedule is on extinction?. remember. operant conditioning extinction

Cloning rare or extinct animals - . flick user: frank mauer cc 2.0. what is a clone?. noun – an organism produced from