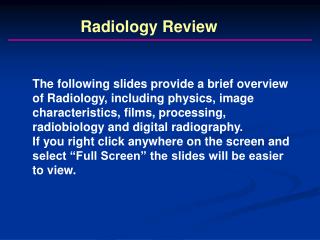 Radiology Review. The following slides provide a brief overview of Radiology, including physics, image characteristics, films, processing, radiobiology and digital radiography. If you right click anywhere on the screen and select “Full Screen” the slides will be easier to view.

ACR-RFS Overview - . a brief introduction to the american college of radiology. acr mission. to serve patients and

The Resident as a Professional in Radiology - . self-learning module. association of program directors in radiology

RADIOLOGY REVIEW Andy Codding February 2002 - 2. radiology on the national board examobtaining and interpreting