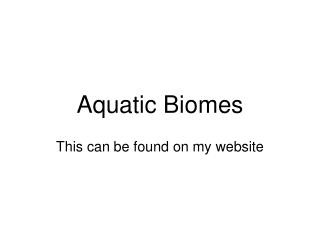 Aquatic Biomes. This can be found on my website . What factors influence the kind of life an aquatic biome contains?. Salinity (how much salt) Depth (related to how much s unlight ) Speed of water flow D.O. (d issolved oxygen levels). Zones of Freshwater Lakes. Aquatic Biomes - . a biome is a major ecosystem spread over a wide geographic area, and characterized by certain types of

AQUATIC BIOMES - . chapter 4 section 4 sc b-6 students will demonstrate an understanding of the interrelationships among

Aquatic Biomes - . enviromental science 2011. what is a

Aquatic Biomes - . terrestrial vs. aquatic biomes. terrestrial biomes are ones located on land in your group list the 6