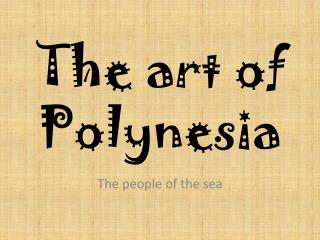 The art of Polynesia

The art of Polynesia. The people of the sea . The migration path of the Polynesians. About Polynesia. TIKI.

The art of Polynesia

Using the Art of Tattoos as a topic in the classroom - . …an opportunity for health education and art education. by

The Maori - . arrival. several waves of migration came from eastern polynesia to new zealand between ad 800 and 1300.

The Tahitian Culture - . by: justin cheng. origins. tahiti is estimated to have been settled between ad 300 and 800 by

Art of the Pacific Islands

Art of the Pacific Islands - . katie milliken. aka australia and friends. wait…where?. this is the pacific region. it

CARVING - . the process of subtracting. l.e.q.’s. how does examining an example of previous civilizations and cultures