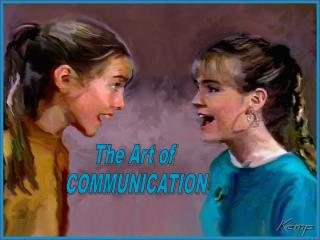 The Art of . COMMUNICATION. Good communication occurs when two important things take place. The expression of a thought or feeling and the effective listening of that expressed concept. Establishing fulfilling interpersonal relationships is enhanced by mastering the communication process. The Art of - . communication. good communication occurs when two important things take place. the expression of a

Elements of Art- the Building blocks of Art - . review of vocabulary words. line. a mark with length and direction(s). an

“The true art of memory is the art of attention.” - . - samuel johnson. can you remember something you probably see

The Art of Presentation - . based on “the art of presentation”, 1999, department of education and training, by j.

The art of Samurai - . by larry jingle berry, mally and the giant peach, rosin yellow. samurai

The Art of Aging - Gcac stephen ministry continuing education. the art of aging. april, 2014. for ourselves learn about

The Art of China - . shang dynasty. history of china begins archaeologists have discovered foundations of their palaces