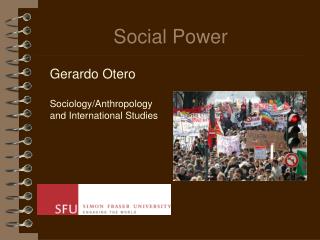 The Power of the Situation - . we just learned about how social conditions affect human behavior, thoughts, and feelings

Influence, Power, and Politics: An Organizational Survival Kit - . chapter thirteen. after reading the material in this

Theory of Social Influence - . definition:. social influence is defined as change in an individual’s thoughts ,

Power and Social Influence - . by: paul renouf and geoff toal. what is power and social influence?. power – capacity or

The Power of the Situation - . social psychology is the study of how social conditions affect human beings. social

Leadership and Power - . aged 3153. thought for the day…. “the key to successful leadership today is influence, not

power &amp; authority - . what is power?. the ability to control and/or influence people and resources. concepts of

C82SAD Social Influence I: Obedience and Conformity - . power and influence. power is the capacity or ability to exert

Power and Politics: How People Influence One Another - 10. organizational behavior core concepts. mcgraw-hill/irwin

The Explosive Power of Social Proof - Social proof is the most powerful weapon on the web. recommendations from friends,