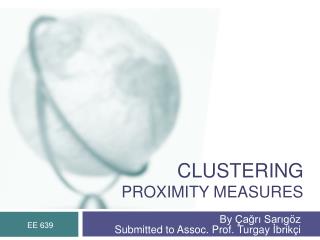 CLUSTERING PROXIMITY MEASURES. By Çağrı Sarıgöz Submitted to Assoc. Prof. Turgay İbrikçi. EE 639. Classification. Classifying has been one of the crucial though activities of human kind. It makes it easy to perceive the outside world and act accordingly. Proximity - A principle of design. proximity. read “the joshua tree principle” on your handout. principle of

Proximity - . cva project taha suglatwala. passage:. exposure has been defined in various ways in the past. for example

Proximity - . font. what is it? how close or far away items are from each other grouping items close together shows

Proximity - . font families. design principles. items related to each other should be grouped together by using proximity

Measures of Clustering Quality: A Working Set of Axioms for Clustering - . clustering is one of the most widely used

Proximity Switch - . definition. proximity switches open or close an electrical circuit when they make contact with or

Proximity Introduction - . comments we consider in this topic a large class of related problems that deal with proximity