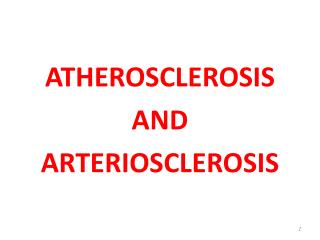 ATHEROSCLEROSIS AND ARTERIOSCLEROSIS. DEFINITION. Chronic inflammatory disease of blood vessels that is of large arteries characterised by formation of fibro-fatty plaques called atheroma. Hardening of arteries - Arteriosclerosis It is a modern life style disease and is a major cause of

ATHEROSCLEROSIS - . learning objectives. definition of arteriosclerosis and mention the three patterns of it? mention

Atherosclerosis - . atheroma are not merely filled with lipid, but contain cells whose functions critically influence

Atherosclerosis - . caitlin cleary biochemistry spring ‘12. what is it?. a type of arteriosclerosis characterized by

Arteriosclerosis obliterans - . maria arteaga. etiology. disorder accompanied by a narrowing or an occlusion of the

The grey zone: What to do for the “intermediate risk” patient? - . lifestyle-heart hypothesis. mozaffarian et al.