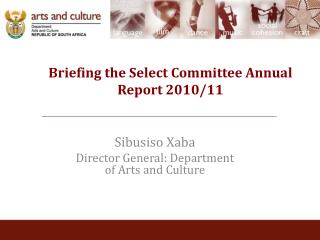 W A R R A N T ANNUAL TOWN MEETING TOWN OF WAREHAM October 25, 2010 - . the wareham board of selectmen is looking for

Department of International Relations and Cooperation 2011/2012 Annual Report - . presented to the portfolio committee on

Department of International Relations and Cooperation 2011/2012 Annual Report - . presented to the select committee on

ISSUES EMINATING FROM ARMSCOR’S ANNUAL REPORT FOR THE 2005 / 2006 FINANCIAL YEAR - . presented to the portfolio

PRESENTATION TO PORTFOLIO COMMITTEE ON SOCIAL DEVELOPMENT 01 MARCH 2011 - . purpose of the presentation. the purpose of