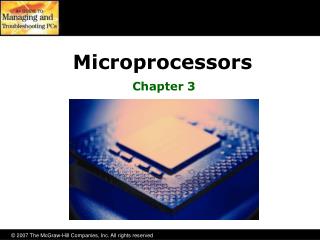 Microprocessors. Chapter 3. Overview. In this chapter, you will learn how to Identify the core components of a CPU Describe the relationship of CPUs and RAM Explain the varieties of modern CPUs Identify specialty CPUs Install and upgrade CPUs. Central Processing Unit (CPU) Core Components. Microprocessors - . chapter 2. external data bus. make sure that you read the analogy explaining exactly what the