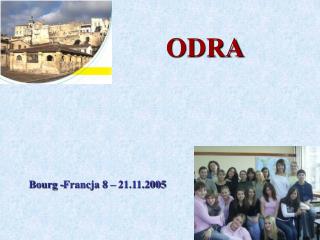 ODRA. Bourg -Francja 8 – 21.11.2005. Before all…. Poland lies in Central Europe. It has borders from the west with Germany, from the south with The Czech republic and Slovakia, from the east and north east with Ukraina, Byelorussia, Russia and Lithuania. POLAND.