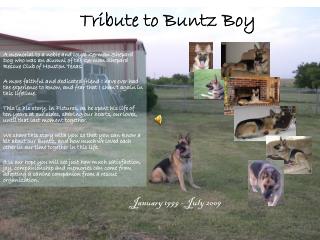 Tribute to Buntz Boy. A memorial to a noble and loyal German Shepard Dog who was an alumni of the German Shepard Rescue Club of Houston Texas. A more faithful and dedicated friend I have ever had the experience to know, and fear that I shan’t again in this lifetime. Tribute to DSS Followers - , on the anniversary, of panchkula firing of 25th august,

A tribute - “the hugger”. a tribute. as i attended my daughter’s graduation, i began to realize that one teacher

A tribute to god’s word - . psalms 119. four questions. how strong should be my desire for god’s word? what should be

A Tribute to Allan Thompson - . or – “how to make an earth scientist out of a mall c hick from jersey”. when i

Tribute to the Internet Pioneers - . the internet we know and love today, would not exist without the hard work of a lot

Exhibit K Tribute To Anime - . nicholle gundy and nermeen mageed. i have this fear. that i would not find my way back.

A Tribute to American Warriors