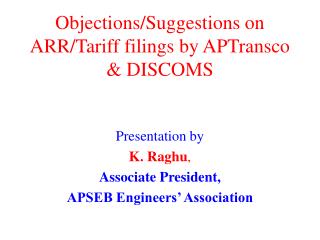 Presentation on Tariff Guidelines - . 22 august 2012 parliamentary portfolio committee on health. who is sama?. sama is a

TOUR SUGGESTIONS - . clark-subic-tarlac and beyond. clark/angeles city tour (o/d). center for kapampangan studies at the

Computation of tariff under open access for bulk customer in a state - . posoco, erldc. presentation outline.

Statutory Financial Return Filings and Other Regulatory Requests - . presented by: the insurance division of the

1. He is so opinionated that he won’t even consider the ideas or suggestions offered by other people. - 1. he is so