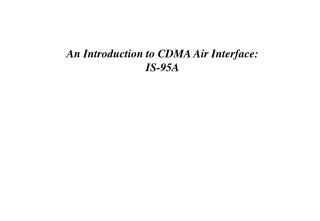 An Introduction to CDMA Air Interface: IS-95A. Contents. Introduction Forward CDMA Channel Reverse CDMA Channel. CDMA Around the World. IS-95 Interfaces. A Interface (BSC-MSC) .. This interface is between the BSC and the MSC. It supports both the control plane and user plane An Introduction to MPI (message passing interface) - . organization. in general, grid apps can be organized as:

Cold Air Damming: An Introduction - . gail hartfield nwsfo raleigh, north carolina. by the end of this instruction, you

Weather An Introduction to Air Masses - . what we measure. 1. temperature thermometer - device for measuring heat mean

Designing to an Interface - Gregor hohpe and bobby

What is an AIR MASS? - . an air mass is a huge body of air that has similar characteristics as the area they were formed.

An Introduction to The Interface Theory of Perception - . presented by zsuzsa morgan. what do you see?. a hat? an