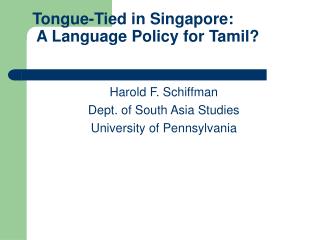 A Presentation on Singapore Tax System and Formation of Companies &amp; Trusts in Singapore Presented By Kenny Lim,

The Story of Mr Tongue - . here is mr tongue. mr tongue lives in a house, which is your mouth! your teeth are his windows

Language Planning and Policy - . language planning. is all conscious efforts that aim at changing the linguistic behavior

American Slang &amp; Tongue Twisters - . what is slang ?. definition : slang is the use of informal words and

All Singapore laws are written in English - . but the english language is the most ambiguous language resulting in

The Rise and Fall of Finnish Language-Education Policy: A Blueprint How to Bring about a Crisis - . sauli takala who

History of Singapore Before 1819 - . was there a singapore before 1819?. how do we know about early singapore history?.

What is language? - . what does this mean?. how do we distinguish between language and non language?. language is rule