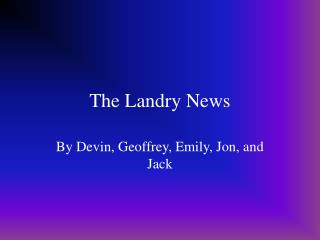 Devin J ones - : to strike or occur to with a sudden feeling of wonder or astonishment, as through unexpectedness.

The Landry News - . particular. stands out from others. tension. a feeling of anger or discomfort between two people.

ANDREW CLEMENTS - . andrew clements was a teacher for seven years after college. he started getting into kids books by

What’s in the news ? - . by: alexa white bronwyn thomas emily slipp thomas johnston. here are a few news stories that

WELCOME TO Cnidarians! By Devin , Josh and Sam - . jellyfish and more. what do cnidarians look like?. jellyfish :

Jack He - . introduction and interests. background information. i was born in wuhan, china on august 6, 1991. i am fluent

Geoffrey Chaucer The Canterbury Tales - . st. thomas a’ becket. “will no one rid me of this meddlesome priest”

Geoffrey Chaucer 1343-1400 - . the canterbury tales. biographical information. considered one of the 3 greatest poets of