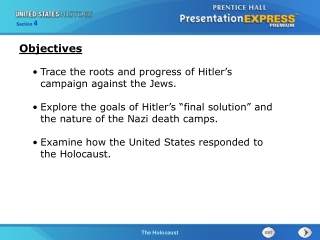 Objectives. Trace the roots and progress of Hitler’s campaign against the Jews. Explore the goals of Hitler’s “final solution” and the nature of the Nazi death camps. Examine how the United States responded to the Holocaust. Terms and People.

DEATH CAMPS - . all polish death camps linked by rail to those parts of europe marked to send jews to their death zyklon

Concentration Camps - . by: austin stolze, dustin johnson, and jared gjertson. even before nazi control, much of the

The Concentration Camps - . letterdear drew,to describe the course of the day in a concentration camp is a difficult

Life in the Internment Camps

CONCENTRAITION CAMPS - . the final s tep for a complete genocide of a race. before the final

Death Camps - . there was no selection process; jews were destroyed upon

Liberation of the Camps - . general dwight d eisenhower told american gi’s to take photographs of everything they saw

Concentration Camps - . the chambers, the bodies, the prisoners. prisoner forced to stand in one spot for a long period

“Life” in the Camps - . camps were originally intended to imprison the people the nazis most

Prisoners of The Camps

Life in the Camps - . civil war soldiers. focus question. identify five reasons why someone might enlist in the military

Internment Camps - . the laurier years had seen a tremendous wave of new immigrants who had been attracted by canada’s

Liberating the Concentration camps - . by: sammy

The Holocaust … Arriving at the Camps - . in this image, people are being herded aboard cattle cars to a concentration