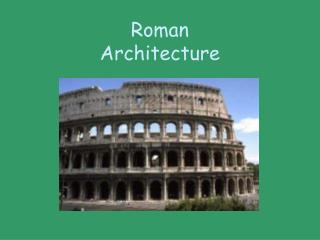 Roman Architecture Arches The Romans used arches to support the things they built. They built victory arches, buildings and aqueducts. Aqueducts Aqueducts- a way to carry water There wasn’t enough water in the city of Rome. The Romans brought water in from the surrounding countryside.

The Roman Domus : Architecture and Domestic Life in the Republic - . house fronts in a residential neighborhood in

Roman Art - . roman art. what was roman art like? the romans admired greek art and architecture. they placed greek-style