The Cycles of the Moon - PowerPoint PPT Presentation 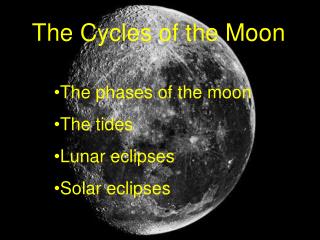 The Cycles of the Moon

The Cycles of the Moon

PHASES OF THE MOON - . pre/post-test. why does the moon have phases? how many phases are there? how long does it take the

MY TRIP TO THE MOON - . our mission. …can we build a settlement on the moon?. moon. crater. moon facts  distance

Phases of the Moon - . an interactive presentation by: mrs. sarita shetenhelm. click this button to come back to this

Lunar Cycle - . taks objective 5. the student will demonstrate an understanding of earth and space systems. teks 8.12

-please take out your moon phase charts and fill in the names of the phases as we go!  - Moon phases!. -please take

BLUE MOON - . no physical difference during this occurrence second full moon in a calendar month occurs every 2 or 3

The Moon - . exploring the moon. satellites are used to identify lunar features and resources there is an abundance of

PHASES OF THE MOON - Conclusion. introduction. task. process. evaluation. phases of the moon. a webquest for 4th grade

Moon Phases - . lesson 5. two questions to consider:. could the decepticons (evil transformers) hide from us on the moon.

The Moon’s Phases - . by: jesse gatewood. the moon’s phases:. new moon:. a new moon occurs when the moon is directly