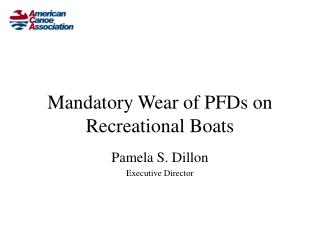 Mandatory Wear of PFDs on Recreational Boats Pamela S. Dillon Executive Director Who is the ACA?

The Future Is Here - . picatinny arsenal’s recreational lodging upgrade. picatinny has a lot to offer, but could we

How to Provide The Mandatory Annual HIV Confidentiality Update: For HIV Service Providers in New York Who Need to Fol