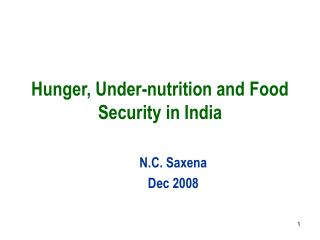 Hunger, Under-nutrition and Food Security in India N.C. Saxena Dec 2008 MDG 1: Eradicate extreme poverty & hunger Target 1: Halve, between 1990 and 2015, the proportion of people whose income is less than $1 a day

Food and Nutrition security - . moderator and presenter laila lokosang. critical areas . in the context of

Hunger In India - . by: ca may ng. what can hunger do to you?. you body will start to feed on its own fat and body

Forth National Seminar on Food Security and Nutrition Under the Theme: “Child and Maternal Nutrition” - . enhancement