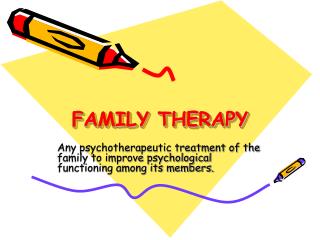 FAMILY THERAPY. Any psychotherapeutic treatment of the family to improve psychological functioning among its members. What are the advantages of treating a family rather than an individual?. Perspective.

Family Therapy - . a systemic approach. the family as a system. systems are composed of units who have some

family therapy - Hello, my name is deborah karnbad, lcsw-r many people come to therapy for depression, anxiety, and/or

Family Therapy - . http://www.youtube.com/watch?v=9pu-htdkzg8. two focuses. the first is togetherness and the second is

Family Therapy - . as a treatment modality for substance abuse in adolescence. maeve dwan - november 2006. overview what

Experiential Family Therapy - Introduction. the nature of experiential approaches are not easily learned through role