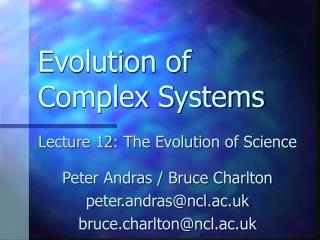 Lattice Model of System Evolution - . richard de neufville professor of engineering systems and of civil and

Complexity and Hierarchy - . concept of complexity. “whole is more than the sum of its parts” holism new properties

Strategies and Rubrics for Teaching Chaos and Complex Systems Theories as Elaborating, Self-Organizing, and