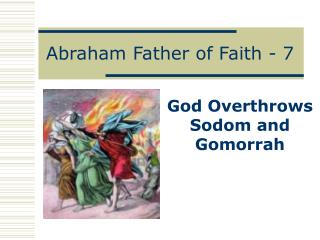 Judaism - . a history. c. 1800 – 300 bce. biblical judaism. according to tradition, the jewish religion began with

The Covenant of the Pieces - . eternal unconditional covenant of grace. abram and the covenant. romans 4: 1 ¶ what then

Integrated English -3 - . unit fourteen father forgets. pre-reading questions. what kind of father do you have? how do

Weaving the Fabric of Our Faith - . tapestry of faith. a new era of curricula for all ages that nurtures…. tapestry of

ARTICLES OF FAITH - . national baptist convention, usa, inc. articles of faith. the scriptures the true god the fall of

Faith - . why believe?. hebrews 11. 6 and without faith it is impossible to please him, for he who comes to god must

Playing the Wise Wench: Women Beware Women - . critics on the rape of bianca biggs attempts to refute claims that bianca

How to Defend Your Faith - . presented by david asscherick. does the faith need to be defended?. we can easily answer

The Holy Rosary - . the luminous mysteries. baptism of jesus. in the name of the father, and of the son, and of the holy