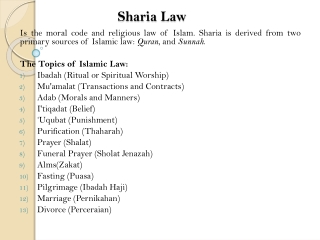 Sharia Law. I s the moral code and religious law of Islam. Sharia is derived from two primary sources of Islamic law: Quran , and Sunnah . The Topics of Islamic Law: Ibadah (Ritual or Spiritual Worship) Mu'amalat (Transactions and Contracts) Adab (Morals and Manners) Sharia - . divine law, or god’s law; it is the system of rules that allah intended for humans. qu’ran (koran). the

Keys to understanding the Islamic law of Sharia - This page discusses about islamic revival today, muslim issues and

In SUDAN – under Muslim Sharia law Meriam Yehya Ibrahim - 27 years old. imprisoned at 8 months pregnant along with her

A Ten-Part Study of Sharia Law Part 2 -- The Caliphate - . prepared by lyle b. mccurdy, ph.d. overview of the ten

The ICU rule their lands with the strict Sharia law, which desires foreign influence out - The flee of the dictator